What Do Apple And The ES Have In Common?

In today’s article, I’ll start with the chart of Apple, because it is so similar to what is happening on the E-mini chart. So first up, notice where I have put the yellow dotted line, where the first red down-arrow is, and how Hawkeye had a phantom isolated high at that point on the 27th of February at a price of 133.60. 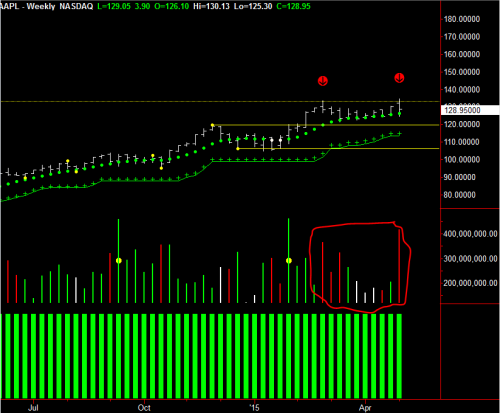 As you can see from that point, the market has just gone sideways, although the trend dot is slightly rising.

Now, the volume that is displayed on the chart doesn’t show a Hawkeye Volume Radar dot on it, because one wasn’t generated. Which means that although this appears to look like high volume, the fact is that it was just average volume.

And if we look at the range of the bar, it was an average price range bar, which means there was no selling coming into this at that time. It is just in its distribution mode. And if you look at the volume at the bottom, which I have circled, you can see that it is classic cyclical change of trend volume, where you would go red, green, no demand with the whites, etc. You can see that it’s trying to make up its mind in a distribution phase.

And unless it breaks out of the 133.60 range and closes at the end of the week right up above that mark with the rising trend dot, we’re still going to be in our weekly cyclical change of direction. We will still be in our trend pause mode and distribution. We will be in our congestion zone at the top of the market waiting for enough volume to come in to push the market up. But when I show you the ES, you’ll see that it is totally dependent on that chart.

Now, let’s move on to the ES chart. 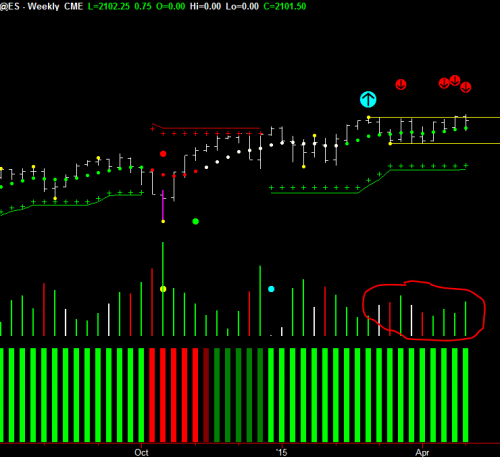 As you can see, I have placed a cyan arrow pointing up. That occurred on February 27, and that isolated high, which is been indicated by the yellow dot on the Hawkeye has held all the way since 27 February.

And this week we visited that price, and it hit it and backed off again. As you can see, there are four red arrows, showing you that there have been four attempts to get through there, and all have failed. If you look at the volume, again you can see that is total topping volume going on. It’s not a trend volume, because trend volume would all be green. But you can see that there’s red, green, white no demand, red, green, green, green.

So in the last four weeks, you’ve had green buying volume coming into the ES, but the price hasn’t moved. It really hasn’t gone up, and it achieved a breakout of that high on February 27, and continued a trend run. So this week is a very important week, because it really has to do something.

So, any of the Gann traders who read this, you know that WD Gann said; on the fourth or fifth attempt prices normally go through support and resistance. Well, it backed off on this fourth attempt to get through this resistance.

And this coming week, we’re going to see whether that was a back off, or whether it is going to go back up through the isolated high yellow line that I’ve drawn off the pivot high that occurred on February 27th. So, in fact, if you look at the two charts also, between the ES and the Apple, you can see that time-wise they are both struggling around those price areas, and that were achieved on February 27th.

So, it’s going to be an interesting week coming up, and let’s watch it carefully. It’s going to be absolutely fascinating to see how this plays itself out. At the moment, the market is in total congestion on both markets, and we are waiting to see breakouts occur to the upside this coming week.