Is The Euro On The Verge Of Collapse? What Does Hawkeye Say?

If you look at the daily Fatman indicator, you can see that I have placed a red arrow at the top by the green line, which is the Euro. It is in overbought territory and starting to bend over, so we are expecting a decline. 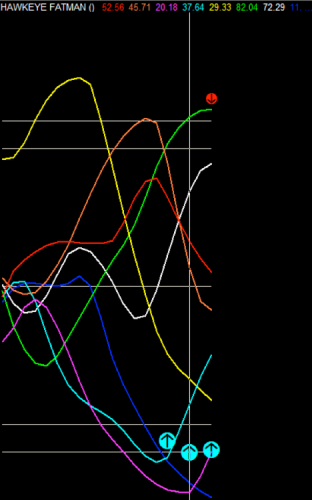 If we look down at the bottom of the Fatman, I have placed cyan arrows, where we can see the three currency pairs, namely the New Zealand Dollar, the US Dollar, and the Japanese Yen are all in oversold territory turning up. This is going to be the start of the move on the Euro to the downside when this gets underway. So, keep your eye out for this Euro move. It will take time to develop, and it should be quite a substantial move, certainly back down to the lows of 1.06, which it has tested before.

Now, if we look at the EURUSD daily chart, you can see that the daily is in an uptrend. 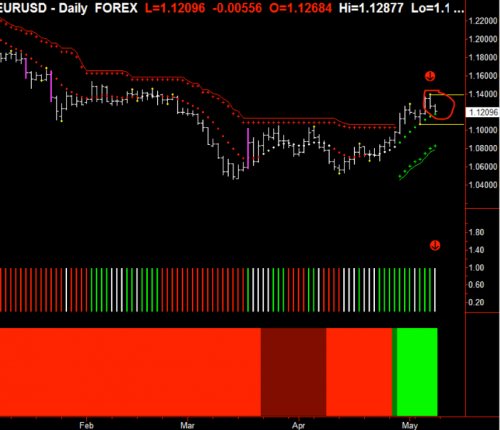 However, on Thursday and Friday, it generated the last isolated high that I have circled with the red arrow (in fact, all the daily charts except the Swiss Franc are putting in Pivot highs). You can also see that the Trend dot is starting to go flat. It is still rising, but it’s not showing any momentum. And if we look at the bottom at the red arrow down, you can see that the Volume is neutral. So, I would expect, having seen what the profile of the Fatman is, that we will see a termination of this up trend coming in this week.

If we look at the weekly chart below, you can see that where I’ve placed the red arrow, we have 50% of an isolated high, the Hawkeye Pivot, which is indicated by a higher high and a higher low than the previous bar from last week. 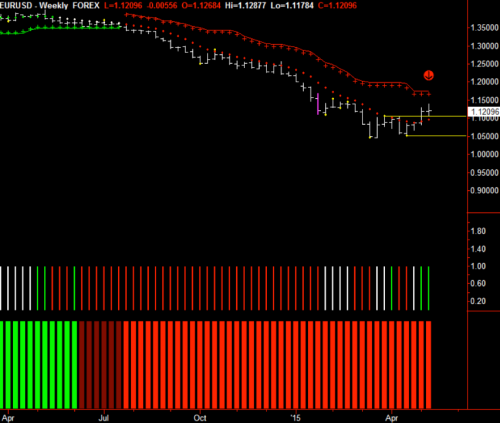 Now, if this coming week gives me a lower high and a lower low, a yellow Hawkeye Pivot will occur there, which will indicate that we are settling into a minimum of three, five, or seven bars of decline. That also coincides with the last isolated low that you can see pushed up the market three bars, which is what I would expect to see off isolated highs and lows. I’ve always said that they normally go three, five, seven bars in the opposite direction of the overall trend. So, we are on the third bar of the opposite of an overall trend, which is the trend down. And we would see this week, hopefully, that you get that isolated high, the yellow dot comes in at the end of the week. The Trend dot would also go flat indicating that there’s no momentum in that uptrend at all.

Now, if we come to the monthly chart, you can see that I’ve placed a red arrow on the current bar that’s being built. 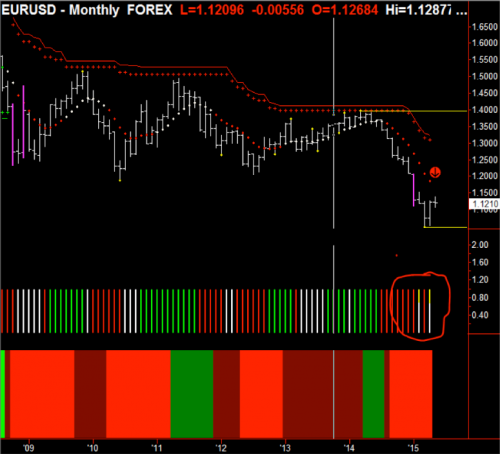 As it is at the moment, that is 50% of an isolated high. Again, in other words, it has a higher high and a higher low than the previous bar. So, if next month is a down bar, that again will print a yellow Hawkeye Pivot on that bar. Also, if we look at the Volume, which I’ve circled at the bottom, you can see that it goes red, no demand, red, no demand. Again, showing us that there is no demand for, or buying volume, in this up move that’s coming in.

So, in conclusion, we’ve had an up rally in the daily, which looks as if it’s stalling out and reverting back down onto the weekly and the monthly direction of the Euro. The Fatman on the daily also shows that the Euro is solidly overbought and a decline is expected.