Our bullish breakout confirmed a long entry at $27.15. We entered the trade with 3 targets — one contract to be executed at each target. Our first target was acquired at $28.35, locking in $1,200.

Once that target contract was filled, we moved our stop to break even as there was no reason to risk our profit on the table for the remainder of the week. Targets 2 and 3 were never successfully filled.

This being a passive, weekly trade strategy we closed out our 2 remaining contracts at the closing price of the 1400 EST candle on Friday afternoon at $29.59 paying us a generous $4,880.

That puts the total take for last week at just over $6,000 using this strategy!

Not too shabby for just having to set up the trade, move your stop to break even and close out the open contracts Friday afternoon. 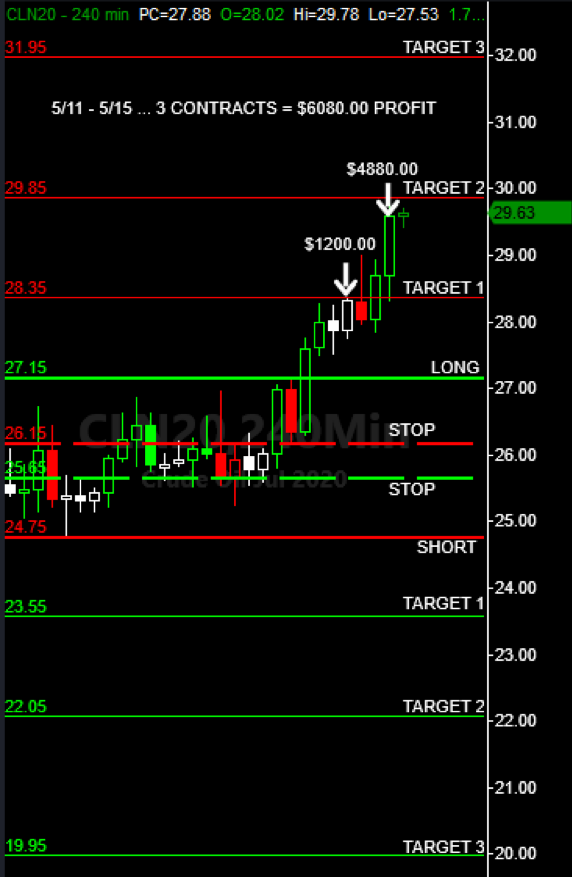 The First Signs Of Real Oil Demand Recovery Are Here

United States West Texas Intermediate (WTI) crude oil futures are breaking out to the upside of a seven-session trading range, solidifying its third consecutive weekly higher close. The catalyst behind last week’s strength is a report that showed China’s daily crude oil throughput rebounded in April from a 15-month low in March as refiners cranked up operations to meet renewed fuel demand after lockdowns imposed to prevent the spread of the coronavirus outbreak were eased. Friday’s move was impressive, but upside momentum had been building most of the week with the market underpinned by a friendly government inventories report, the announcement of government crude oil purchases for its strategic reserve and a dampening of concerns over rising supply by the International Energy Agency (IEA).

China processed a total of 53.85 million tonnes of crude oil last month, data from the National Bureau of Statistics (NBS) showed on Friday, equivalent to about 13.1 million barrels per day (BPD). That was some 11% higher than 11.78 million BPD in March. The agency said on Friday it had adjusted the database of industrial enterprises it uses to help compile a range of production numbers. On that basis, April’s crude oil throughput was 0.8% above the year-ago level, it said; a Reuters calculation using NBS data from last year put the rise at 3.4%. Additionally, state-backed refiners have pushed up crude oil processing rates to around 79% in May, according to estimates from consultancy Longzhong Information Group, close to January’s 82% level before extensive movement restrictions were imposed to prevent the coronavirus spreading.

The U.S. Energy Department said on Wednesday it will buy up to 1 million barrels of sweet crude for the government’s emergency petroleum reserve as part an effort to help producers struggling as the coronavirus strangles oil demand. The purchase of up to 1 million barrels “will serve as a test of the current conditions of physical crude oil available to the SPR as opposed to the financial market trading WTI NYMEX futures contracts,” the department said in a release. The department will purchase the oil from small to midsize domestic producers, it said.

Oil prices are also being underpinned after a drop in U.S. crude stocks and an IEA forecast for lower global stockpiles in the second half. On Wednesday, the U.S. government reported that crude inventories fell for the first time in 15 weeks. Meanwhile, the International Energy Agency (IEA) on Thursday again forecast a record drop in demand in 2020 though it trimmed its estimate of the fall citing easing lockdown measures.

The mid $28.00 price area can likely absorb selling pressure throughout the balance of May. Above which the mid $40.00 price area is the next near term several week target.

A daily settlement above the mid $40.00 price area indicates a good annual low has been made. Then the mid $55.00 price area would be attainable within several months, likely making the high for the remainder of the year.

The main trend remains bearish according to the weekly swing chart, however, momentum has been trending higher since the formation of the closing price reversal bottom from the week-ending May 1.

The main trend will change to bullish on a trade through the nearest swing top at $54.86. This is highly unlikely, but there is room for a normal 50% to 61.8% retracement.

A trade through $17.27 will negate the closing price reversal bottom and will signal a resumption of the downward trend.

Based on last week’s price action, the direction of the July WTI crude oil market for the week-ending May 22 is likely to be determined by trader reaction to the 50% level at $27.46.

A sustained move under $27.46 will signal the presence of sellers. The first downside target is a downtrending Gann angle at $24.95. Crossing to the weak side of this angle will put the market in a bearish position with the first target a minor 50% level at $23.14, followed by the main bottom at $17.27.

We acquired a LONG position at the open of the globex session on 5/10/20 @ 1800 EST. We purchased (10) CLN20 July WTI Light Sweet Crude Oil Futures Contracts @ $26.04. Our position is currently +/- $6.00 in the profit heading strong towards our $36.04 profit target. Our stop is already in the money and we are looking forward to closing out another passive trading for massive income crude oil trade for 2020!!!