This week we welcome Max Larsen, President of Future Finances Inc. to the blog as a guest columnist for a review of the week’s economic news. Max is a professional money manager, with $200 million under management and a long time user of Hawkeye.

1. Weekly Wrap
2. Technically Speaking
3. Business Optimism Goes Stratospheric
4. Inflation is Creeping In
5. Johnny Depp – A Lesson on What Not to Do

The past week was rife with earnings, economic data and commentary from two major central banks, but the market shrugged off the busy event calendar remaining in its range bound ways.

The big news of the week was a decent jobs report with employers adding 227,000 jobs last month according to the Labor Department. This was the biggest gain since September although wage increases were rather modest. This from The Wall Street Journal (weekly summary from Briefing.com):

The backdrop of a steady but unspectacular labor market is likely to keep the Fed cautious about raising interest rates and could prevent the central bank from colliding with President Donald Trump as he aims for faster economic growth.

We shouldn’t forget about earnings season. Our very own Brad Huffman chimed in:

In addition to a slew of economic reports, earnings season continued to unfold. These were generally supportive of the current trend. The most significant weakness has come from large multinational companies indicating concerns about overseas activity. Despite those concerns, both earnings and sales growth are poised to expand for the quarter.

Please remember that historically speaking February is one of the weakest return months of the year with the worst part coming towards the end. It may not happen this year. There is a lot of money flowing into stocks right now.

I have two charts to share today. The first is from Arthur Hill of StockCharts. He points out that it has now been 79 days since we’ve seen greater than a 1% decline in the S&P 500. Talk about “range bound”…

Just look at the bottom indicator called the ROC or rate-of-change. This is nothing more than how much the S&P 500 changed on a percentage basis on a daily basis. I high-lited the 79 days in blue. It denotes a strong market to me. 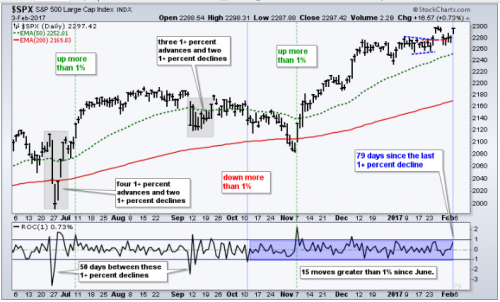 The second chart is one you’re very familiar with. This is the 8-months chart of the S&P 500 (daily prices). Notice how we came into the “Support” zone last week and bounced out on Friday. 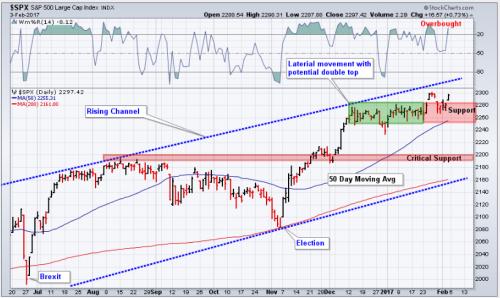 I still contend that we are due for a pullback. It may not happen, but I could envision a minor correction to the “Critical Support” area (red high-lite) which would only be less than a 5% retracement and still well within the upward trend line and above the 200 day moving average. We’ll see…

We have gotten numerous emails and phone calls on people’s concern for the stock market’s lofty state. Once again here’s Brad Huffman on a nice reply that I had to share:

Thanks for the note. The market is responding to views that tax and regulatory changes from the new administration will help improve economic conditions. We do believe in the short term we will see a slight pullback (maybe 5%), but that would be normal and draw in new investors. The technical and fundamental pictures are pretty healthy right now, but volatility will remain present as it did last year.

We have several positions in the portfolio that help us hedge any market swings so unless we see significant deterioration in the charts, we are comfortable with the moderate risk exposure we have in the portfolio.

Brad is correct. Just take a look at the most recent NFIB Small Business Index. 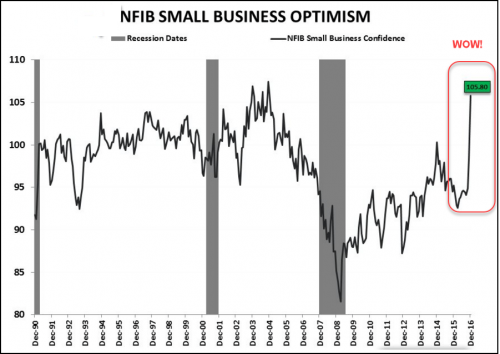 Like its title says – it measures the business optimism on a quarterly basis. This stratospheric 38-point jump in the number of business owners who expect better business conditions is staggering.

Whether you like the President or not – and I know there are many who don’t – it is what it is and we have to live with it. That said, there is little doubt the WSJ’s headline hits it on the head: “Trump Pace Has Heads Spinning.” Many businesses are very encouraged that someone is finally attacking the mind-numbing regulations and restrictions.

Inflation is Creeping In 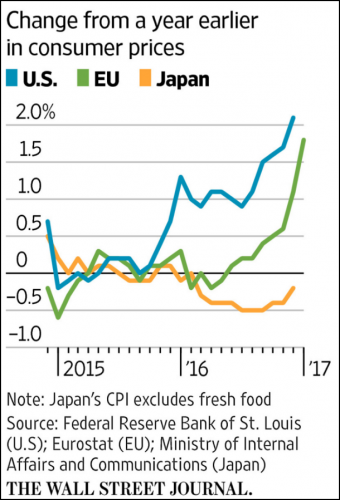 We’re starting to see the possible resurrection of a little inflation. The Eurozone just reported a 1.8% rise in consumer prices while we’re hitting 2.1% in the U.S. The Wall Street Journal chimed in:

After years of fighting against deflation, the U.S., the eurozone and Japan show glimmerings of life in consumer prices and wages, evidence that an era of exceptionally low inflation is receding from the global economic landscape.

Several factors are behind the move, including a rebound in energy prices, falling unemployment which is reducing slack in some labor markets, and central banks’ low-interest-rate policies that spur lending and economic growth.

To be sure, any economic shocks could reverse this trend. Still, this is important since certain asset classes – like commodities and gold – tend to thrive in this environment. However, those sectors which are bond proxies – like telecom services and utilities – tend to do badly when inflation and interest rates rise. Be forewarned…

Johnny Depp – A Lesson on What Not to Do

Johnny Depp is having money problems and is suing his business managers for mishandling his finances. It turns out that it may not be all their fault and are counter-suing since the Pirate of the Caribbean star was spending more than $2 million a MONTH to maintain his lifestyle. In spite of repeated warnings he is now having serious money problems. This from CNBC.com:

The lawsuit said Depp paid more than $75 million to buy and maintain 14 homes, including a French chateau and a chain of islands in the Bahamas.

$2 million per month and $75 million in non-income producing assets? What could possibly go wrong? He’s obviously a very talented actor yet it boggles the mind that he could be so inept with his finances – whether he had an advisor or not… You can read the entire article HERE.

That’s more than enough for this week my friends. Congratulations to the New England Patriots. Wow, what a game. Multiple records broken – including the biggest comeback in Super Bowl history. It just goes to show you – never give up. Have a fantastic week!

Join us in the next free LIVE Hawkeye Demonstration Room held every Wednesday at 9.30am EST US. You will learn more about volume and volume price analysis and see more examples and live trade setups. It is open to all.

Click this link for more information or to join us in class.

Learn to trade the Hawkeye way.