Summary: The GBP may see huge swings this Friday after the result of the Scotland independence vote is announced. Hawkeye Traders will hold two special live trade rooms hosted by our Founder, Nigel Hawkes. We encourage you to attend these FREE live trade rooms on Friday to help you profit from this momentous event, which will certainly move the market dramatically. The first room will open for one hour starting at 0800 UK time (3:00am Eastern). The second room will open for one hour beginning at 1300 UK time 8:00am Eastern).

Later this week, on Thursday, September 18th, the Scots will vote whether to become independent from the UK. Then on Friday, the results will be announced, and as a result, we are expecting a huge trading opportunity will be available to smart traders.

If Scotland votes for independence, it will have huge ramifications, both socially and financially, to Great Britain.

That’s because Scotland accounts for 8% of the population, and thus, about 8% of the tax revenue. So, if they vote to leave the UK, it will mean a significant financial hit to the UK that will hurt their current efforts to reduce the deficit.

Various economic experts are predicting that if Scotland chooses independence from the UK, it will have an effect of about 10% on the price of the British Pound.

And even if Scotland votes to remain part of the UK, Sterling is currently significantly under-valued and should go back to the 170 mark. (It’s trading at 1.62 at the moment.)

So, either way, a huge swing may happen, and thus, there’s a HUGE opportunity for us to profit.

That’s why I will be holding a special set of FREE trade rooms on Friday, and I want you to attend.

The purpose is to look at the opportunities that are arising in trading the pound.

Now, let’s look at some of the Hawkeye charts to see how things are building up to this momentous trading opportunity.

In the monthly chart, notice where I’ve placed the cyan arrow.

After posting an isolated high (marked with the yellow pivot dot), we see a price drop of several bars. This is very typical. You’ll also notice how prices are finding support at the Hawkeye stop, which are the little green crosses.

And finally, I want you to notice how last month, red selling volume has arrived (as shown by the red bar under the cyan arrow). However, the actual price bar is not showing extreme weakness. I would have expected a wider ranging bar here, pushing down with this fundamental news.

But it has found support where the stops are on the monthly chart. 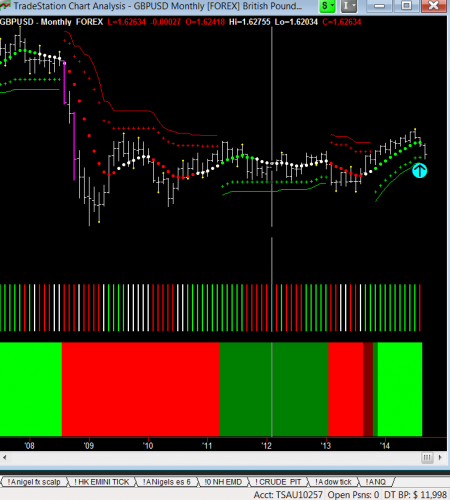 Next, let’s look at the weekly chart. Notice what happened at the end of the week on Friday. Green volume came in (green bar down below the cyan arrow), and we have 50% of an isolated low here. So, next week, if prices go up, you will have an isolated lower there, which will in turn, will tend to push this market up. 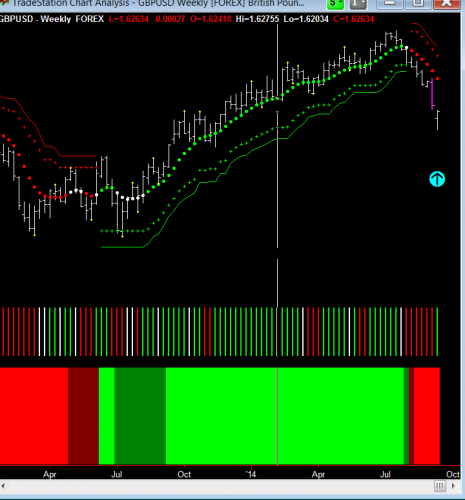 Now, let’s look at the Daily, and as you can see, we have a wonderful little doji (where the cyan arrow is) which is pushing prices up. And you can also see how the trend dots are starting to go flat, which means, we have entered congestion. 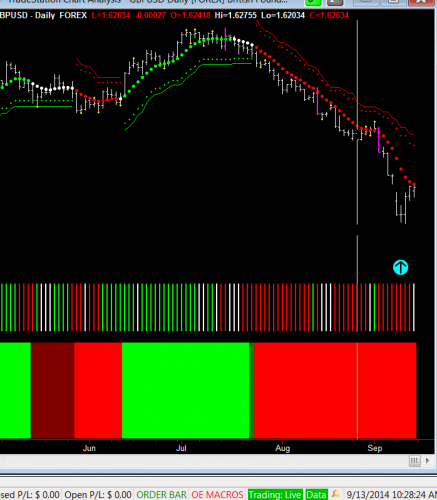 Next, let’s take a look at the 720 minute. You’ll notice how we have a wide bar. But we also have green volume coming in where my cyan arrow is (pushing this market up). So, we are in congestion. 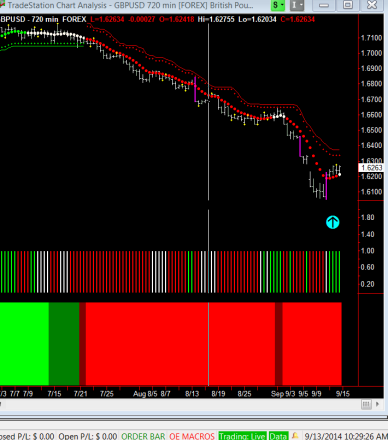 Finally, if we look at the weekly chart of Fatman, we can see that the orange/brown line, which is the Pound, has reached its over-sold zone (as marked with the cyan arrow).

And you can see that the US dollar (the cyan line marked with the red arrow) has also reached its over-bought zone.

Both are indicating that this trend run has come to its congestion area, and it should start turning around and start going up.

You can also see that the other currencies, particularly the magenta line (Yen) is starting to decline as well.

So, that could be a very good pair as soon as the British Pound starts to rally . . . to look at the Pound/Yen as a pair to trade.

All in all, it’s showing us that the market move to the downside has taken place.

The market is going to sit back and congest until the news comes out this Friday.

So, please come to our FREE live trading rooms this coming Friday.

I’ll see you there!