How Not To Lose Money on False Breakouts

In this week’s newsletter, I will consider two different instruments. First, I will revisit the E-mini weekly since I have been discussing it in the last few newsletters. Then, I will do a more in-depth look at gold.

Okay so let’s start with the weekly chart of the E-mini. 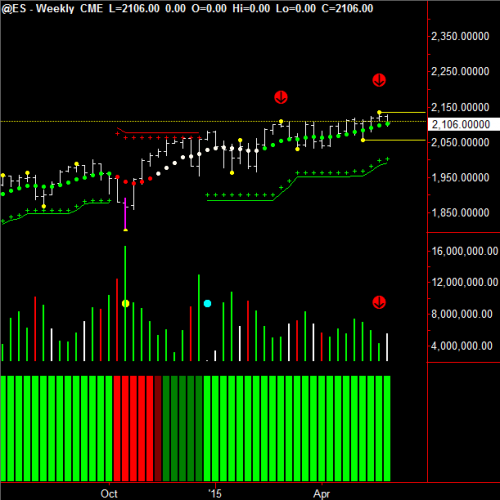 First, notice how I have placed three red arrows on the chart. Let’s begin with the red arrow on the left hand side. Now, over the last few weeks, I have been saying it is paramount that this level is taken out with the bar, where no part of the bar closes on that dotted line.

You could have been easily suckered into this, because on the second arrow on the top, you can see that the price has come out of the dotted line and no part of the bar touched it. So, you could easily start to think we are on a breakout to the upside.

However, if you look down below (where I placed a red arrow on the volume), you can see that the bar that broke out had declining volume. Now volume, as we all know, is the gas that powers the car. And, if there isn’t enough gas in the tank, the car will slow down. And that’s exactly what happened here.

So, the week that it broke out there was declining volume. That means the professionals were not buying then. The professionals were standing back, and that price move was caused by the amateurs coming in and buying it as they saw the breakout from the previous red arrow from that dotted line.

But we, as Hawkeye traders, know that we have to have a trend in volume to make markets move. So, with a bit of forensic analysis (as I like to call it), you can see that the market didn’t break-out. And, in fact, this week it has closed back inside the range of the original dotted line, so that resistance is there. We now have a new isolated high and isolated low and the markets are going to unfold. We do need to see more volume coming in to get this as a move up.

Now, the next chart I want to look at is gold. As a backdrop, there is something very interesting and fundamental going on at the moment. What I’m talking about is that several countries throughout Europe, including Austria, Holland, Germany, and Switzerland are bringing their gold reserves back from outside of their countries. Could this be the start of eventually going back to a gold standard? It’s certainly very possible.

So, with that in mind, let’s go have a look at the monthly chart of gold first. 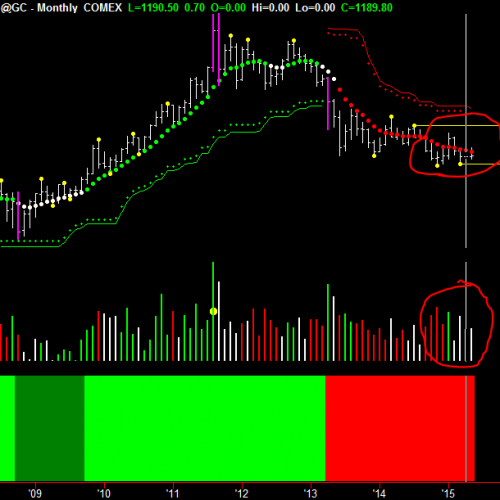 But the market hasn’t moved down. If you look at the price, you can see that we have two isolated lows forming a bottom, where the circle is on the price. And, the price is going sideways. So, let’s see what happens with that chart as the months roll out. 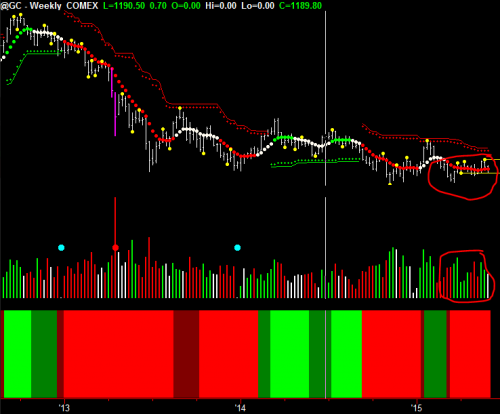 Here, you can see on the gold weekly that I have circled the volume again. This is classic accumulation volume (red, green, red, green, no demand). And again, if you look at the price, you can see that the market is going side-ways. For example, look at the flat Hawkeye Trend dots and all the isolated highs and lows.

Certainly, this is a market that it is in accumulation.

So now, let’s move to the daily chart. 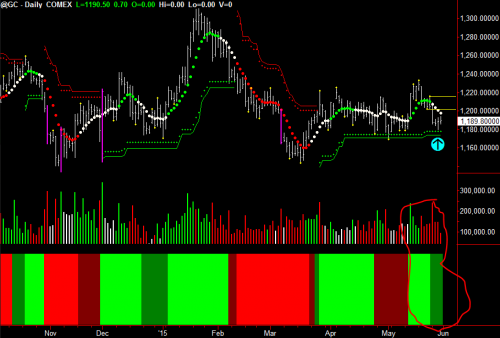 Although this is in an up-trend, look at what has happened. You can see where I have circled the volume at the bottom, how the Heat Map (the bottom indicator on the chart) is dark green, showing us that the bias is still on the up-side. But, for the last ten days, we have had red volume, which means that selling volume is coming in to this market.

But, the market hasn’t gone down. It has just gone side-ways. It came down to where I placed the cyan arrow, where it virtually touched the Hawkeye Stops (which as we know always act as support and resistance) and placed a phantom isolated low where the cyan arrow is.

So, we should expect this to be a low pushing it up. Undoubtedly, this market is highly oversold and one would be expecting a decent rally to be coming in to gold at some stage over the next months. So, make sure you look out for this, and definitely have it on your radar.