Apple: A Screaming Buy or an Overripe Fruit Ready To Fall?

Last week, Apple reported its cash reserves had grown to $178 billion, due to phenomenal sales (74.5 million) of the latest iPhone 6. This massive cash reserve is larger than the total market value of Pepsi, Disney, or Amazon. They also reported the biggest quarterly profit ever for a public company – $18 billion in net income in the last quarter of 2014.

Because of this, the financial news analysts are virtually tripping over themselves with predictions of Apple’s stock price soaring to $140 and above. Activist investor Carl Icahn, who owned 45 million shares of Apple as of last August, claims that the stock could be worth over $203 per share!

Knowing, as we do, that Volume is the only leading indicator, let’s take a look at what the Hawkeye indicators are telling us about the future of Apple’s stock price.

Let’s begin with the monthly chart below. As you can see, I’ve put two arrows on the chart, one at the top, and the other at the bottom. The arrow at the top is pointing at the Hawkeye High Pivot. And you’ll also notice I’ve draw drawn a line across that point, showing you where the price must close above, by the month, to show it is still in this up trend. 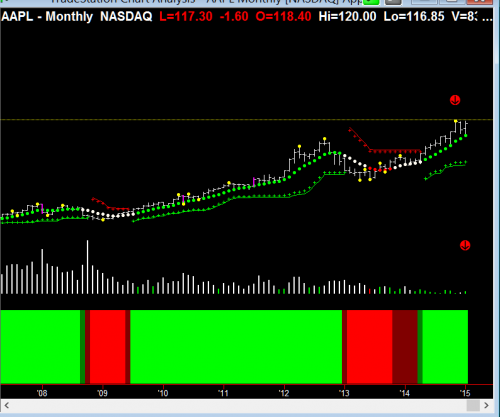 At the moment, we see it’s stalling out at that level, which is showing resistance. Now, let’s focus on the second red arrow down below. This is showing there’s declining volume in this up move. So, the Hawkeye indicators are telling us not to expect the explosive move to the upside all the pundits on the TV are talking about. However, if there is a close above the line I’ve drawn at the Hawkeye Pivot point (which is at 120), then all bets are off, and Apple could be off to the races.

Now, let’s look at the weekly chart below. I have drawn a line, to show you where that weekly pivot is holding. You’ll also notice the pivot was just hit (where I’ve placed the cyan arrow). See how this occurred on high volume and that the Hawkeye Volume Radar indicator marked the event with a yellow dot? 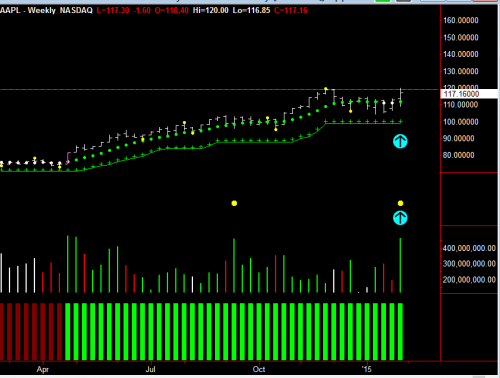 However, if we look at the range of the bar, there should have been a lot more volume to go into that to push it up through that line resistance. So, yes, there was a lot of good news about their cash reserves , but you can see that the price went up and hit its resistance level and retreated from that line.

Now, let’s look at the daily chart below. Again, you can see the resistance I’ve marked with the line. But, if we look at the volume on the daily chart, you can see that we have a typical topping volume profile, where we have red volume, no demand volume, a little bit of buying volume, and then selling volume. So, all of this is showing that it’s going to be a defining week coming up to get Apple through 120. 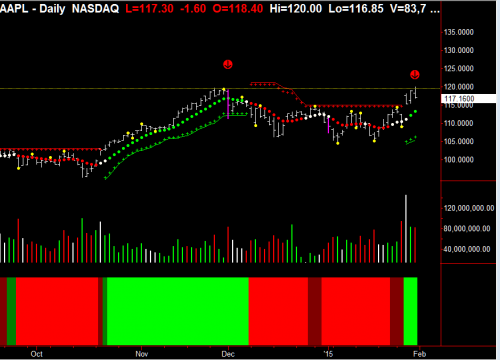 We teach this and many other methods in our live training room held every Wednesday. Click this link for more information or to join us in class.