This particular trading strategy is the flagship of this system. We recommend only the highest probability of successful passive trades for massive income. These trades occur on average less than twice a month, but when they pay… they pay BIG!

Our bullish breakout confirmed a long entry at $30.75. We entered the trade with 3 targets: one contract to be executed at each target.

Once the first target contract was filled, we moved our stop to break even as there was no reason to risk our profit on the table for the remainder of the week.

Targets 2 and 3 later in the week were successfully filled.

So the total take for last week executing this strategy paid us $5,600.

Not too shabby for just having to set up the trade, move your stop to break even, step aside and let it ride! 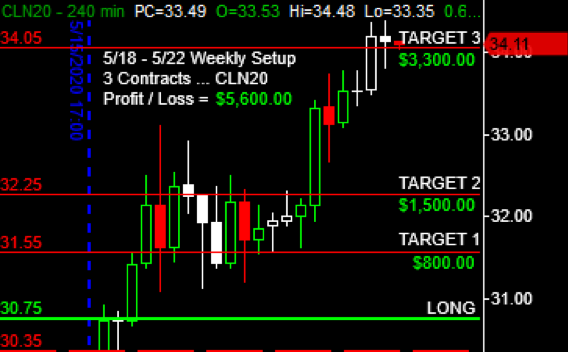 Have you taken advantage of any of these crude oil moves?

If so, hit leave a comment and tell us what trade you took and how you did!

The rally in the crude futures is beginning to approach levels in which United States shale production declines will begin to slow and possibly reverse as low cost producers attempt to generate revenue.

At the same time, there is evidence of recovering in fuel consumption.

The Organization of the Petroleum Exporting Countries, Russia and other allies, known as OPEC+, agreed to cut supply by a record 9.7 million barrels per day from May 1.

So far in May, OPEC+ has cut oil exports by about 6 million BPD, according to companies that track the flows, suggesting a strong start in complying with the deal. OPEC says the market has responded well.

With now nearly 39 million American workers on unemployment and countless Americans who are either ineligible to collect or are still waiting for their unemployment to be processed – growing recession / depression concerns linger.

The mid $12.00 price area can absorb annual selling pressures. Above which the mid $39.00 price area remains a several week target. Potentially the mid $55.00 price area is in reach over the next several months.

The $28.00 price area can likely absorb selling pressure throughout the balance of May. Above which the mid $39.00 price area is the next near term several week target.

A daily settlement above the mid $39.00 price area indicates a good annual low has been made. Then the mid $55.00 price area would be attainable within several more weeks, likely making the high for the remainder of the year.

A weekly settlement below the $28.00 price area would most likely yield a $12.00 price area retest within several weeks, which would likely bottom out selling pressure for the remainder of the year.

The main trend remains bearish according to the weekly swing chart, however, momentum has been trending higher since the formation of the closing price reversal bottom from the week-ending May 1.

The main trend will change to bullish on a trade through the nearest swing top at $54.86. This is highly unlikely, but there is room for a normal 50% to 61.8% retracement.

A trade through $17.27 will negate the closing price reversal bottom and will signal a resumption of the downward trend.

Based on last week’s price action, the direction of the July WTI crude oil market for the week-ending May 22 is likely to be determined by trader reaction to the 50% level at $27.46.

A sustained move under $27.46 will signal the presence of sellers. The first downside target is a downtrending Gann angle at $24.95. Crossing to the weak side of this angle will put the market in a bearish position with the first target a minor 50% level at $23.14, followed by the main bottom at $17.27.