Get Ready To Say Bye-Bye To The Euro

Just before Christmas, I said that 2016 there would be a great trade in gold and that certainly is the case so far. So I hope some of you loaded up on the one stock that I really like – Newmont mining, NEM.

Say Bye-Bye to the Euro

Now it’s the turn of the Euro, so get ready to say bye-bye to the Euro.

Europe is in a mess, with a huge migration problem and steady discourse between member states on how to react to this problem. This ultimately, I believe, will be the catalyst that drives the Euro path as each country looks after its own interests and citizens. Unlike America, with just one central bank, each country in Europe still has its own central bank. Each of these banks can make their own decisions, which ultimately each will do.

The Euro since 2008 has had a 32% decline and this is supposed to be a major currency. So let’s look at the charts as I believe we will have a great opportunity to trade on the short side. 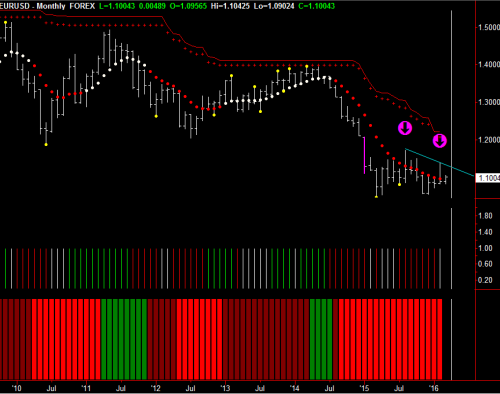 Since the beginning of 2009, the Euro has been in decline. And right now, it is entering congestion on the monthly chart with overhead resistance (where I have placed the blue line). However, if the low of 2015 is taken out, brace yourself! 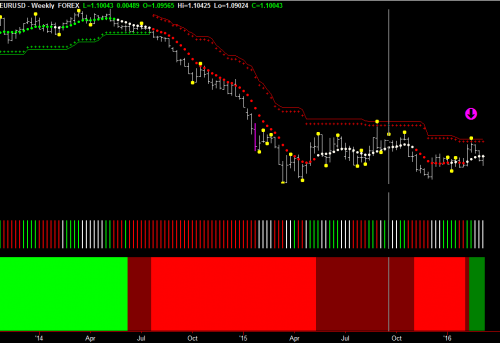 This market timeframe is displaying classic congestion with choppy volume between selling, no demand, and short-lived rallies on buying volume.

Notice where the price went right up to (where I have placed the magenta arrow) which coincides with the Hawkeye barrier which generated a yellow Pivot. 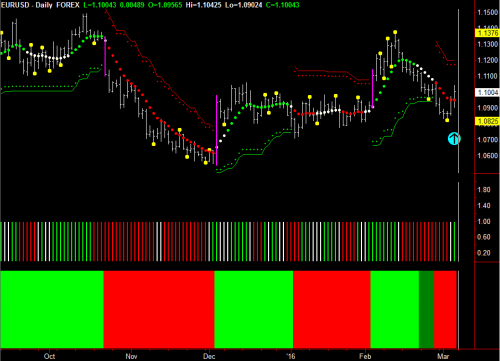 As you can see from where I have placed the cyan arrow, the price is choppy and the Hawkeye Trend dots have gone flat, signaling more congestion.

We now wait for a Hawkeye Pivot high to come in, which will push the market back down. And subject to a close under the low Pivot 1.0825, congestion will end, with an exit to the downside. This will trigger our entry into this trade. Bear in mind that the other timeframe resistance and support areas must support this move.

As I have with gold, I’m highlighting a position trade here which could last for several months. Eventually, I do believe a great opportunity will come our way this year.